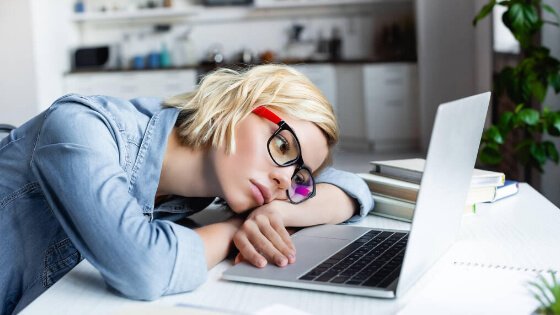 If you work alongside someone who can’t concentrate for more than three seconds, never does the cleaning, and can’t stop playing on their phone, then stop and think for a second.

What’s really happening to your employee with ADHD? Are they lazy, or is there more going on than you first thought?

Working alongside a difficult employee is a challenge for any management team. But finding out they have a disability (note: we hate that term) makes it harder for many managers.

For some, it becomes an inconvenience. They look at the recommendations, implement them, then treat the staff member like everyone else and leave them to fend for themselves. But then some employers go too far the other way, completely misunderstand the guidelines and move into “TMI/you’re not my mother/I am capable you know, I just struggle to function sometimes” territory.

See where the issue is here? Should you treat us all the same as everyone else, or give us all special dispensation?

Well let’s work it out. Straight from an ADHD brain who’s been there as an employee and a manager, here are seven reasons why people with ADHD make the best employees with your help and support.

1. Their Disability Is an Ability

Well, ADHD results in an inability to function, otherwise known as Executive Dysfunction. Suppose your employee can’t finish a task, and their poor time management causes employer hardship, ending up in a poor performance review. Your Employee with ADHD doesn’t see themselves as having a disability, even though the term disability exists in the law’s eyes.

In the workplace, making reasonable accommodations is a legal requirement. Indeed, that’s the case for everyone, right, no matter what their strengths and weaknesses are? You might find that all your ADHD employee needs are regular check-ins and more positive reinforcement. And in that way, they’re no different from your other employees.

But don’t ignore their struggles.

ADHD brains are as complex as it is. That said, there’s nothing more demotivating for someone that has executive dysfunction than being made to feel like the negative repercussions define them. Let their unique talents and personality define them instead of for a change.

2. Your Employee With ADHD Thinks Outside the Box

People who have ADHD are more creative because they see things from a different perspective. They’re able to connect disparate ideas and are great when it comes to problem-solving.

When people with ADHD develop a new way of doing something, they often come up with something nobody’s ever thought of before. It is because they can see things from a different angle.

What potential employer wouldn’t want that in their arsenal?

People with ADHD struggle to follow routine schedules. It’s also why, for many with ADHD, the pre-agreed accommodation is a perceived waste of time. As a result, overall job performance suffers, which can have a knock-on effect on individual employees, especially if there’s a mutual reliance on getting the job done.

To counteract this, those with ADHD are great in a crisis. They’ve become very adaptable and learn how to cope with sudden changes in plans or other unexpected tasks that might crop up at any time.

Major life activities don’t phase the employee with ADHD, especially when they’ve found the best ADHD medication that suits their needs. It’s spending three hours trying to find a clean sock that they left on top of the lawnmower that bothers them more.

Because people with ADHD are so enthusiastic, they have boundless energy that makes them exciting to be around. Many people with ADHD fit the morning person’s stereotypical mould, mainly because their brain switches on straight away or Gets tired more quickly because of their hyperactive mind (aka their enthusiasm). Still, people with ADHD always put 100% effort into what they’re doing.

5. They Are Good at Multitasking. Sometimes.

People with ADHD learn how to deal with unexpected tasks because they have to do that all the time. As a result, when faced with a new challenge that requires them to switch from one activity to another, people with ADHD can do it in the blink of an eye. They may not be great at finishing tasks, but they’re experts at moving on to another task if needed.

People with ADHD thrive on teamwork. Because they’re so enthusiastic and like to help others with their tasks, they enjoy being part of a team. And, let’s not forget the Executive Dysfunction in someone with ADHD means they’ve had to spend their whole life working as a team, even doing everyday tasks.

Their creativity also comes with a big heart and a thirst for fun.

People with ADHD are willing to take on new and unusual tasks. It is because they like to be the ones doing things that everyone else is doing differently. They love to be involved in projects that are a little bit out of the ordinary and like to be the first person who has tried it before.

The Best Employer Achieves Performance from Employees with ADHD

The rewards of having an employee with ADHD working for your business are huge. As you can see, people with ADHD make great employees if they’re in an environment that understands their needs. Embrace that employee victory.

By focusing on their strengths and allowing them to thrive, not only will you find your business flourishes, but many of those issues you once had no longer exist, or at worst, are manageable with the proper care. For the greatest leaders, it becomes an opportunity worth seizing, no matter how high the mountain.

If the type of accommodations made in the workplace support and empower your Neurodivergent colleague to overcome any obstacles that come their way, they’ll be the most valuable person in your business.

Keep reading for more information on the difficulties for people with ADHD in the workplace and the most common questions people ask!